It was always going to happen – British medics dying due to coronavirus exposure. Italy’s national doctor’s association reported yesterday that at least 50 of their doctors have died. Several, possibly eight – although no one knows for sure – have died in China. At least four doctors and one nurse have died in Spain, with 5,400 health workers infected as of last week. But the death of Dr El Hawrani, added to those of two other doctors earlier in the week, shines a light on the stark fact that Britain’s NHS burden is carried disproportionately by ethnic minorities.

Ear nose and throat consultant Dr Amged El Hawrani, was from a Sudanese background, as was Dr Adil El Tayar, an organ transplant consultant. Dr Habib Zaidi, who died last Wednesday, was a GP of Asian extraction from London. His wife and four children are all medics too. Hospital pharmacist Pooja Sharma from East Sussex also died last week, although it’s unclear if she picked up the virus from her father who worked in immigration at Heathrow and who also died, or from a patient.

The burden is not just through deaths either. Earlier in the month, 36-year-old Walsall nurse Areema Nasreen was reported to be in intensive care. Due to patient confidentiality, Public Health England has not been releasing information about other staff members who have been diagnosed with Covid-19. With a lack of testing, they’re unlikely to know anyway. But the picture, for now, is clear. Ethnic minority staff are over represented in the firing line.

And that’s no surprise. Although around 80% of the NHS is reported to be white, more than a third of medical staff is drawn from ethnic minorities. According to a source at Public Health England, many ethnic minority staff work in the A&E departments – because of its unforgiving nature, it’s a specialism not many want to do, and is relatively under-subscribed. However, up-to-date information about staff ethnicities in specific specialties doesn’t seem to publicly exist, so the information is hard to verify other than anecdotally.

And there’s another reason why medical staff from ethnic minorities are doubly at risk. Underlying health concerns. The top four conditions associated with Covid-19 are heart disease, high blood pressure, diabetes and lung disease. Anyone with these conditions is at a higher risk of contracting the virus. The British Heart Foundation says that first generation South Asians have up to a 50% higher risk of coronary heart disease. If you’re African or African Caribbean, you’re at higher risk of developing high blood pressure and having a stroke compared to other ethnic groups. Both South Asian and Afro or Afro-Caribbean ethnicities are at higher risk of diabetes too. The reasons for these increased risks are unclear, but genetics are believed to play a part, as well as lifestyle. 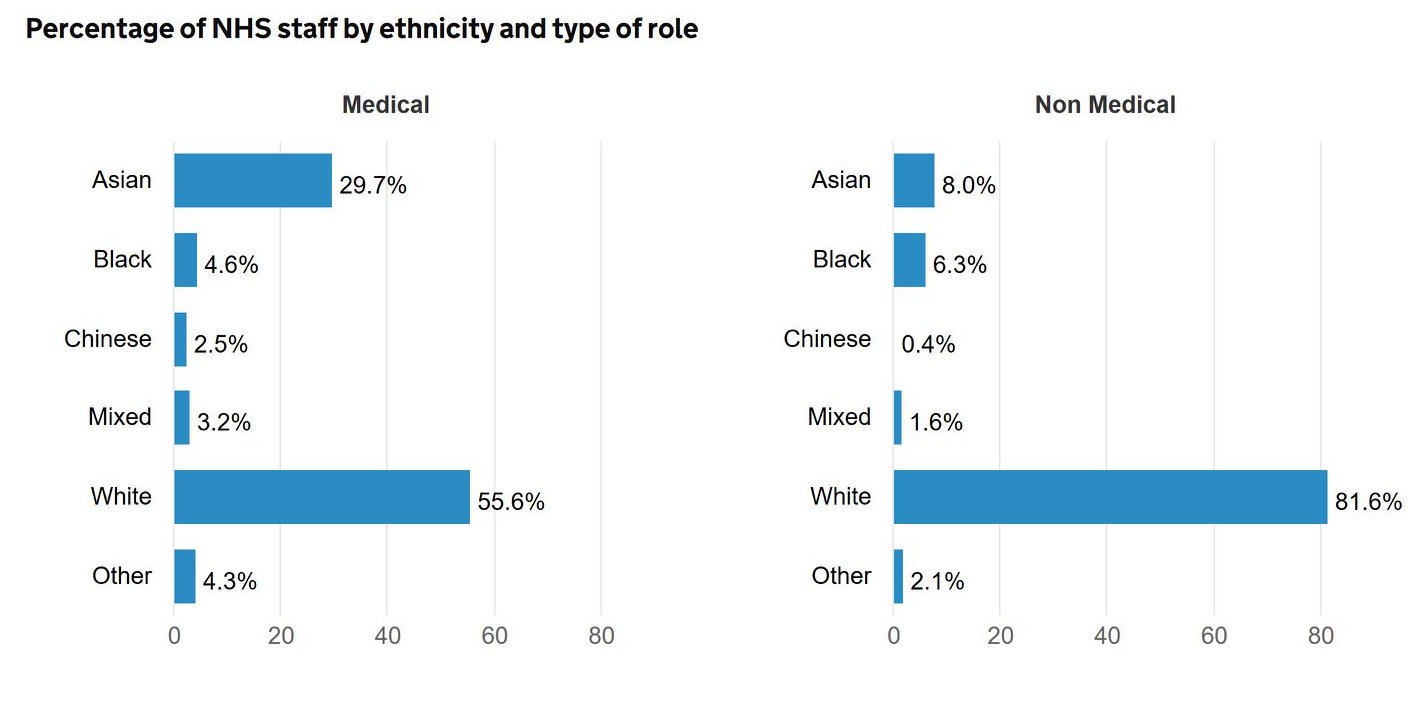 A further complication is family dynamics. Just like Dr Habib Zaidi, many South Asian families have multiple members within the medical profession. Dr Khaleeda Siraj, a GP from Homerton, has been self-isolating after her daughter picked up a cough. Her husband is a gastro-enterologist who has just been asked to work on the frontline when his period of isolation comes to an end. Dr Siraj’s sister is also a GP as well as teaching at Imperial. Their brother is an OB-GYN – delivering babies from mothers who may have the virus. None of them have been given adequate personal protection equipment. Immigrant parents are often the butt of jokes when it comes to what they regard as acceptable or successful careers for their children, for a reason.

This weekend the comedian Gina Yashere made a point that there has been a whitewashing of images of NHS staff on some public forums. That while we should clap for our whole NHS, let us not forget the contribution made by those from ethnic minorities. She’s faced some criticism for what they’ve described as trying to politicise a national crisis, but others agree and see it as a symptom of a wider dismissal of minority contributions. Not necessarily by the NHS – but by the public in general.

Others have pointed to an image on the Mirror’s website, which seemed to have taken out the black staff members on a poster of NHS workers. I’m unable to find the original article on the site, but the MCB’s Miqdaad Versi has made a note of how it looked before and after complaints were made.

The truth is, there’s no competition here – everybody is facing the same enemy and, in the end, all deaths are equally tragic and painful, especially when the fallen are those who have worked tirelessly in service of their country.

But there is a special burden that is currently being carried by Britain’s ethnic minorities. And it’s probably worth making sure that interviews, pictures and video represent the true nature of those who are fighting for us all.

Tamanna Rahman is an RTS award winning producer and director of current affairs documentaries. She has worked in Manchester, London, Northern Ireland and New York on breaking stories and long-form investigations for the BBC, Channel 4 and Vice.