Meghan Markle’s famous television interview fits into a history of iconography of Black liberation, just as it exposes the inner workings of a white royal institution.

For the first half of Oprah with Meghan and Harry, the audience witnessed a Black woman telling her story to another Black woman, making legible her perspective, and reclaiming her humanity. Much ink can be spilled about Meghan Markle’s complicity in propagating the fictions of a racist institution such as the British monarchy. Similarly, the iconic media mogul Oprah Winfrey has profited from the racial, cultural and social forces that created and sustained the myth of American meritocracy.

However, radical Black feminist thought urges us to focus on the systemic mechanisms of racial hierarchy that excludes Black lives from the domain of full humanity. Instead of criticising specific public figures, such as Michelle Obama, Beyoncé, and of course, Meghan Markle, Black feminism gives us the tools to talk about the compounding oppressions that affect the lives and livelihoods of Black women. In this short piece, my aim is to use these tools to address the royal family’s dismissal of Meghan Markle’s plight as an example of superficial diversity that infiltrates much of modern racial discourse, as well as reflect on the TV interview’s evocation of Black aesthetics as a political and cultural category of resistance

On diversity and inclusion

For a brief lull, the interracial royal wedding was lauded as a golden opportunity to shepherd the monarchy into modernity. But what does this modern sheen encompass? By incorporating a Black woman into its system of kinship, the modern monarchy appeared to signal the end of racism and locate an endpoint to the glaring realities of the afterlives of colonialism and slavery. In this fantasy, any talk of racism ruptures (white) national harmony, which is mobilised by what the feminist philosopher Sara Ahmed calls “non-performative” speech acts: words that are not followed by actions. In the ecology of a multicultural society, positive-sounding words, like “embrace” and “love” in Kasie Hunt’s tweet below, neutralise and contain attempts to address race and racism. 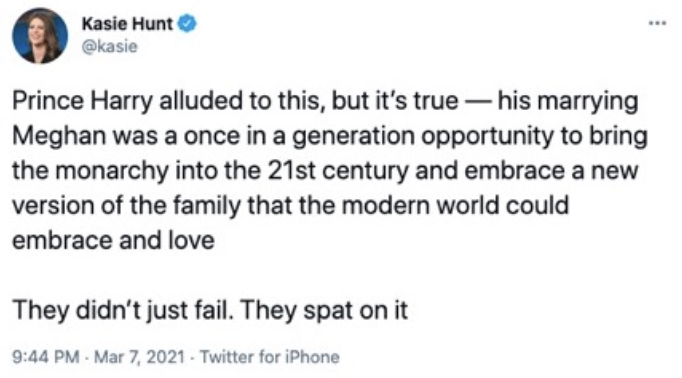 A screenshot of a tweet by Kasie Hunt that says: “Prince Harry alluded to this, but it’s true — his marrying Meghan was a once in a generation opportunity to bring the monarchy into the 21st century and embrace a new version of the family that the modern world could embrace and love [.] They didn’t just fail. They spat on it.” 9:44 PM, March 7, 2021

What makes Markle’s withdrawal from the royal family radical is the reclamation of her voice and agency after her pain and suffering were devalued and swept under the carpet. In the ITV broadcast interview, Markle criticised the virulent racism of the tabloid establishment, and the royal family’s indifferent response to her cri de coeur. “I wrote several letters,” she said over and over again, about the injustices and indignities surrounding her. The Firm, as she sometimes called the royal family, did not shield her from the persistent structural and cultural vilification as she performed “her job”. The monarchy’s treatment of Markle’s racialised depression and fatigue – “I didn’t want to live anymore,” she confesses – exposes the inner workings of white institutions that ruthlessly silence Black, Asian, and Minority Ethnic (BAME) and Black, Indigenous, People of Color (BIPOC) groups in the name of civility, love, happiness, propriety and tradition. Here, I draw on Ahmed’s identification, in Living a Feminist Life, of civility as one of many strategies that oppressive powers use to coerce minoritised people. In these sentiments, Ahmed locates “the violence and power concealed under the languages of civility, happiness, and love, rather than simply or only consciousness of gender as a site of restriction of possibility”. Indeed, the inequality at the heart of Markle’s disillusionment with the royal family resonates with so many Black and other BAME women in white institutions that fail to support and protect them. In Markle’s case, the trauma of racism drove her towards suicidal ideations, which were dismissed as bad publicity for the institution.

What are the implications of Meghan Markle’s refusal to perform civility, to remain silent, to absorb her erasure until she reached the precipice of death by suicide? The personal and the cultural are always political; Meghan Markle’s personal experience of racism points to a larger, public phenomenon of racialised hierarchies. As minoritised people, we are forced to remain subservient and to paper over our feelings of dispossession. We internalise that we are undeserving of fairness, that the racism we encounter is a figment of our imagination. When we speak out, we are faced with the disavowal of institutions that demand proof of our oppression over and over again. The world does not need Meghan Markle to tell it that Britain is a racist place, that there is a deep-seated investment in white supremacy at the heart of the monarchy. All it takes is a look at the daily news, to learn how COVID-19 has affected the maternal mortality rates of BAME women, to see borders closed in the face of refugees, the bodies of Africans drowning at sea. What Meghan Markle’s story cemented is that superficial celebrations of diversity and inclusion, or what scholars call “the politics of representation,” without deep, de-centered, and structural transformations do not constitute change. Quite the opposite, it is a conservative ploy that gives racist institutions a modern veneer. And most damagingly, it demonstrates how feel-good progressivism always defaults to neoliberal fictions that silence the oppressed and affirm the powers that be.

What is striking about the ITV broadcast is its use of the iconography of Black liberation.

Black feminism gives us the vocabulary to dwell on the political and cultural significance of Black aesthetics. Having analysed the fantasy of white British domesticity that the Duke and Duchess of Sussex’s engagement interview evoked a few years ago, I was struck by the aesthetics of this special, particularly its rootedness in Black self-fashioning. Here, I wish to introduce Zora Neale Hurston’s “will to adorn” theory of Black aesthetics, a concept that illuminates how Black people have understood and willingly performed their embodiment, power and position in a white society. From music, to visual language, to sartorial choices, Black people seek to beautify the world around them as a political stance of resistance, community, and care. I borrow Zora Neale Hurston’s language of intentional adornment here, because I find it useful in my discussion of Meghan Markle’s Oprah interview as a representative of an oppressed population responding to a history of injury. How does this perspective reconfigure our understanding of Meghan Markle’s conversation with Oprah? Allow me to start over.

In a lush, sun-kissed, Southern California garden, across from an olive grove, two powerful Black women testify about virulent racism and institutional violence. On our right, a seasoned and decorated matriarch of American broadcasting wears a pink sweater with a crisp white shirt underneath it. She radiates an air of authority, experience and compassion; her ethics of care unfurl the tessellations of Meghan Markle’s “unsurvivable” life as a senior member of the British royal family. Markle’s sartorial choices are as suggestive of the ethos of this conversation. Donning a black dress, she is visibly pregnant. In her voluptuous embodiment, Markle performs her vulnerability, beauty and power. Where Markle’s wedding dress featured the flowers of the commonwealth, which acknowledged her full immersion in the symbology of colonialism and its aftermaths, the lotus flower adorning her flowy silk dress is packed with meaning. As a blossom floating on the surface of the water, the lotus emblematises regeneration that is always rooted in the slime underneath. I see the slime as representative of the structural racism that devalue a Black woman’s insistence on her subjectivity, her humanity and her personhood.

My work on premodern queenship and racial formations can provide a backdrop for understanding the longue durée of these tropes, or modes of thinking, about elite or powerful women in the public sphere today. The persistent fictions surrounding “good” foreign royal women script them as passive, with their mobility restricted and their desires shaped by the will of the patriarchal institution. This iconography is meticulously fabricated through visual and material culture, and can help us understand how Meghan Markle deviated from the ideal in which she was conscripted.

One telling example is the representation of Anne of Bohemia, King Richard II’s queen, in the early modern cultural imagination. For instance, in the anonymous Thomas of Woodstock (1590s), Anne is portrayed as an exemplary queen who gets absorbed by Englishness, her past identity completely erased. On the other hand, an unruly foreign queen like Margaret of Anjou, who performs her political power without reservation, is demonised as the “she-wolf of France” in William Shakespeare’s Henry VI plays (1590s). Margaret’s refusal to abide by the codes of meek English womanhood renders her as a racialised infection gnawing at the heart of the commonwealth – a cultural, political and physiological infection that needs to be excised.

Meghan Markle refused to remain differential to an indifferent establishment who did not care about her welfare and that of her child’s, and for that reason she was vilified and considered incompatible with true, white-centered Englishness. More importantly, her affirmation of her worth and beauty in an idyllic California garden speaks to a long tradition of an “aesthetic of Blackness” – a lineage, an inheritance, a desire “to bring delight, pleasure, and beauty into lives that were hard, that were materially deprived,” to use the words of bell hooks. Seen in this light, Meghan Markle’s control of her narrative, aesthetics and agency, despite a damaging and dehumanising context, is in itself a radical act. It connects her to a history of Black people’s transformative capacity to love themselves and the world, in spite of a world that does not love them back.

Mira Assaf Kafantaris is an Assistant Professor of English at Butler University, Indianapolis, USA. She is completing her first manuscript, titled Royal Marriage, Foreign Queens, and Racial Formations in the Early Modern Period. Her public-facing work has appeared in The Millions, Overland Journal, The Rambling, The Conversation, Synapsis, and Medium-Equity.