The Platform
Latest
Categories
The Harder They Fall: Reimagining Westerns for the Netflix generation
Halima A Hassan
#black-film#black-history#film#idris-elba#lakeith-stanfield#regina-king#review#westerns

An enthralling depiction of social justice and retribution in the Old West blows apart the typical narratives of the Western and brings new possibilities to life.

The image conjured in most people’s minds at the mention of the ‘Wild West’ is that of cowboys and gun-slinging outlaws – almost always white men. Cowboys, as the name suggests, were experts in herding and caring for cattle. Historians estimate that, at the height of their time, 1 in every 4 cowboys was Black. Yet Black cowboys are kept out of most of the narratives and lore of the American West today.

The appeal of the classic Western film for many people is the idea of justice. Westerns value honour, and the stories often depict one or several individuals seeking revenge or retribution against someone who has wronged them. The justice systems of today operate around abstract laws that are often inherently unjust, contrasting to what we find in the world of the Western, where the ‘heroes’ take the law into their own hands.

In almost every way except for the actors we see on screen, The Harder They Fall is a typical Western. The film opens with the protagonist Nat Love’s (Jonathan Majors) origin story, setting the scene for the adventure that’s about to unfold. After witnessing the brutal murder of his parents at the hands of outlaw Rufus Buck (Idris Elba) and his gang, Nat Love makes it his mission to exact revenge. Along the way we encounter numerous impressive characters, especially Stagecoach Mary (Regina King), a strong woman in her own right who also serves as the ‘damsel in distress’, and Cherokee Bill (LaKeith Stanfield), infamous for his quick-draw abilities and calm demeanour, to name a few.

Historians estimate that, at the height of their time, 1 in every 4 cowboys was Black. Yet Black cowboys are kept out of most of the narratives and lore of the American West today.
Halima Hassan

Nat Love is one of the most famous Black cowboys, thanks to a memoir he wrote which cemented his legacy. The Life and Adventures of Nat Love (1907) describes how Love, born into slavery in Tennessee, headed West aged 14 and began working as a cowboy for large cattle operations in Texas and Arizona. Over the years he spent as a cowboy, Love drove cattle across the United States and down into Mexico. He writes about encountering a range of infamous figures of the old West on his travels (including Buffalo Bill and Jesse James) and stumbling into a number of thrilling situations, from being captured by Native Americans and escaping, to witnessing and participating in gunfights.

Though the veracity of some of the stories recounted in this memoir has been questioned by historians, it is one of the only first-hand accounts of a Black American cowboy from the late 19th century, thus incredibly valuable in recording the existence of Black Cowboys. Love quit the cowboy business in 1890 and his memoir was published in 1907. To this day, he remains a Black folk hero to many.

Director and co-writer Jaymes Samuel says the idea to make a Western came to him while strolling through Kilburn, London. Having grown up watching classic Westerns on the BBC, he became enamoured with the genre and wanted to tell a story that put Black cowboys at the forefront. In Samuel’s The Harder They Fall, Nat Love is described as an outlaw who targets other outlaws, and it becomes evident that he and the Nat Love of history share only a name and an era.

The Harder They Fall succeeds as a Western. Accompanied by an exciting soundtrack consisting of music from across the Black Diaspora, and filmed against stunning landscapes, the film is invigorating and seductive. I find myself unable to take my eyes off the screen. Having fallen for the allure of the old West myself earlier this year, it is fitting that the first proper Western film I see is one with all the visual energy I associate with the genre, but filled with faces like mine. I was engrossed by everything, from the range of distinct characters, to the costumes and the sharp-tongued dialogue. Everything about this film is enticing. Granted, the vastness of the story being told and the number of characters means that they are quite two-dimensional, though attempts are made to give some background and purpose to a few. The comic-book style of the action is, however, the main attraction. Though the pacing falls off slightly in the final third of the film, the meeting between Nat Love and Rufus Buck all but makes up for it, revealing a ‘truth’ which changes your perspective on the earlier events of the film.

Not a lot is known about the real Rufus Buck, other than that he and his gang went on a crime spree in 1895, attacking people indiscriminately on the Indian territory of the Arkansas and Oklahoma area. They were captured and hanged by law enforcement not long after. His character in the film is a notorious and ruthless outlaw with a dedicated gang. The story gives Buck two ‘shots’ at redemption, the first being early in the film when he and his gang take over a Black settlement and set their sights on buying it to give the citizens a fixed home, during a time when Black people were not allowed to settle anywhere for long. He attempts this with brutality and little mercy. Then there is his character’s origin story, only revealed in the final confrontation with Love.

Films with majority Black casts and/or Black leads have become associated with narratives which centre racial trauma – as if joy, complexity and the full scope of life cannot be imagined for such characters.
Halima Hassan

This film would stand on two strong, Western legs even without using the names of real historical figures. The risk that audience members might confuse the story they see on screen with the lives these people lived is abated with a disclaimer before the film opens, but why use those names at all? Considering how the existence and contributions of Black cowboys is still mostly unknown, The Harder They Fall could bring these names into homes worldwide thanks to its Netflix distribution. The film will also introduce Black cowboys into the popular imagination, which is vital when too many of the Black stories told constrain us to a set of roles and particular narratives.

Nat Love’s first-hand account of life as a Black cowboy made him a hero to many, and his portrayal in The Harder They Fall will hopefully only extend this legacy and prompt more people to look into his vast and fascinating life. I enjoyed the fact that race was not the explicit point of the story, though there are subtle suggestions of its significance throughout. Films with majority Black casts and/or Black leads have become associated with narratives which centre racial trauma – as if joy, complexity and the full scope of life cannot be imagined for such characters. It is high time that this changes. In period films like The Harder They Fall, it is hard and disingenuous to dissociate entirely from race; but the film succeeds at acknowledging the history, without centring Black pain for the sake of it.

The Harder They Fall has everything that makes the Western genre so exciting: a compelling protagonist on a mission, beautiful imagery, exciting action, a sprinkling of romance and lots of music. An enthralling way to expand existing imaginations. In Westerns, justice is always served, a fantasy with never-ending appeal. 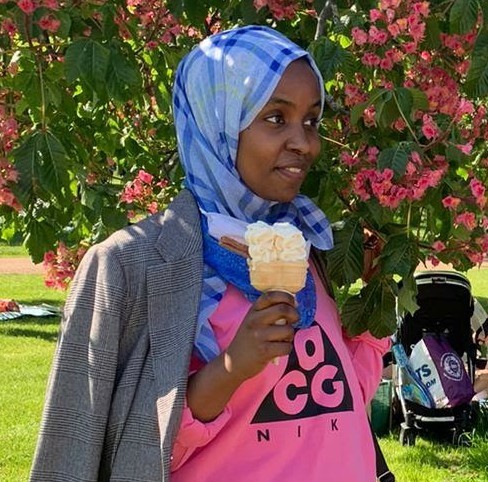 Halima is a writer and editor based in London. She loves film, theatre, comics and video games. Currently, Halima is working on a collection of surreal, fantastical stories inspired by her life in the city and growing up between cultures.