Films to look out for from this year’s Venice International Film Festival, which finds mesmerising talent among a wealth of new female-directed films.

Over the last few years, the Venice International Film Festival has established itself as the launchpad for films which aspire to win an Oscar. This year, the presence of the major US film companies at the Lido seems to have also had a trickle effect: the quality of the line-up for the main competition was consistently high and the minor sections of the programme offered plenty of pleasant surprises. In the last few years, Venice has benefited from a more relaxed stance towards Netflix productions – at least, compared to Cannes. In 2018, this approach was crucial for securing the premiere of Roma, which then went to win the Academy Award for best film. This year, the streaming giant was behind several of the films selected in the main competition including Noah Baumbach’s White Noise, Andrew Dominik’s Blonde and Alejandro Iñarritu’s Bardo.

In the past, Venice has had some troubles with gender representation. In 2018, while at the Berlinale almost half of the selections were films made by women, Venice had only one film directed by a woman in the main competition (Jennifer Kent’s The Nightingale). On that occasion, following much criticism within the industry, the response of the festival director, Alberto Barbera, appeared inadequate. “We look at the quality not at the gender [of the directors]”, he claimed. Ever since that incident, Barbera and his programming team seem to have learned their lesson. This year, incidentally, the two top prizes went to two films made by female filmmakers. The Golden Lion was awarded to Laura Poitras’ All the Beauty and the Bloodshed, a documentary on legendary photographer Nan Goldin’s career and her fight against the Sackler family, the owners of Purdue Pharmaceutical, whose shameless promotion of the highly addictive drug OxiContin has been deemed responsible for the worst opioid epidemic in US history.

The Silver Lion went to Saint Omer, the first feature film directed by documentarist Alice Diop. Inspired by the real-life case of a French-Senegalese woman who killed her baby in 2016, Saint Omer was one of the bravest, most uncompromising films seen this year at Venice. A writer, Rama (played by Kayije Kegame), has come to observe the trial of Laurence (Guslagie Malanda), a young African woman who is accused of drowning her one-year-old baby in the sea. Laurence has pleaded guilty. Like almost everyone in the court room, she seems bewildered by what she has done.

As the film explicitly reminds us, a young black woman in 21st century France is not supposed to sound the way Laurence speaks. Interestingly, this defamiliarising narrative device, ingeniously exploiting a collective racist mindset, is precisely the trick that draws us in to listen and pay attention to what this woman is saying, as she tries to make sense of what she has done.
Sergio Rigoletto

The central dilemma that the film explores is why this young woman has committed such a horrific act. Much of the emotional sway of this film comes from the protracted long-takes of Laurence during the trial, which exalt the outstanding performance of Malanda. The conflict between, on one hand, the horror that the monstrous act of this Medea-like figure may generate in us and, on the other hand, our fascination with this highly educated, eloquent philosophy graduate, turns the trial into a compelling prism refracting questions about motherhood and issues around race, postcoloniality and class. As the film explicitly reminds us, a young black woman in 21st century France is not supposed to sound the way Laurence speaks. Interestingly, this defamiliarising narrative device, ingeniously exploiting a collective racist mindset, is precisely the trick that draws us in to listen and pay attention to what this woman is saying, as she tries to make sense of what she has done.

One of the most exquisite findings at Venice for me was Without Her, the debut film by Iranian director Arian Vazirdaftari. Partly psychological thriller and partly absurdist drama, this is a film that challenges our expectations about what an Iranian film reaching the international film market is supposed to look like. There is no apparent gesture toward social realism here. Gifted with a captivating soundtrack that accompanies the maddening journey of its female protagonist, Without Her is a film about an identity crisis that evokes George Cukor’s Gaslight (1944). The protagonist of the film is Roya (Tannaz Tabatabei), a young woman living in Tehran who is getting ready to move to Denmark with her husband. One evening, she finds a young, distressed woman (Shadi Karamroudi) outside her building. Roya takes her in. The nameless girl becomes increasingly attached to Roya and her husband. Gradually she starts behaving like Roya, who becomes more and more invisible to her husband and to the people around her. Informed by the experiences of several Iranian women who tried to emigrate, the film also adds an extra dimension to current discussions inspired by the ongoing protests for women’s rights in Iran. Without Her may perhaps suggest the distinctive identity crisis of Iranian women facing a new life in the West, with the radical changes that such an experience entails. In another sense, the film is a mesmerising journey through the mind of a woman who feels that the world around her has gone mad and sees no way out. 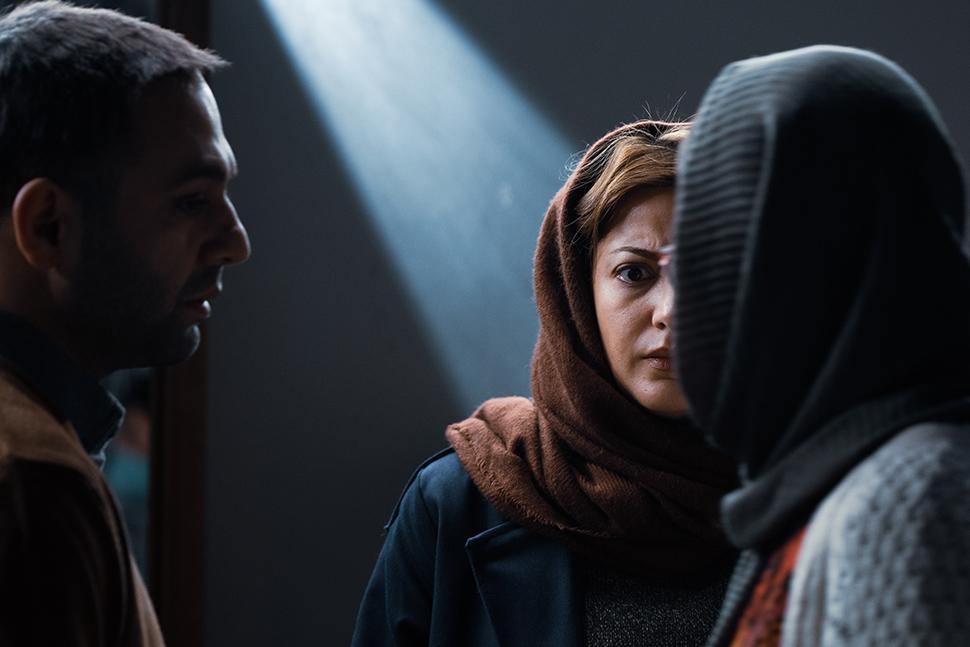 Amanda was the debut feature film for the hugely talented Carolina Cavalli, delighting the Venice audience with one of the wittiest films shown at the festival. Amanda succeeds in that very rare balancing act between being a quirky, elegant film with a very personal cinematic language and one that is undeniably funny, despite its dark undertones. The homonymous protagonist of the title is a jobless – and friendless – twenty-something played by Benedetta Porcaroli, who, after her debut in the Netflix series Baby, here reaches a level of maturity that gives much hope about her acting future. Porcaroli brings to life an eccentric character who goes on a mission to make an agoraphobic girl her new best friend. Despite her fanatical resolve, Amanda fails miserably. It is this obsessive aspect of Amanda’s personality that makes this character both hugely funny and, as the story develops, movingly vulnerable. Is this the story of a young woman on the spectrum? It does not matter, because through Amanda, Cavalli ends up celebrating a kind of difference that, divested of any judgment, strikes for its warm-hearted imaginative power.

Historically, one of the prerogatives of top film festivals such as Venice has been to support and promote the rise of emerging auteurs, those filmmakers eventually developing a loyal relation to the festival that has launched them. The most recent ‘adoptive’ child of Venice has been Luca Guadagnino, who came back this year with Bones and All and won the award for best director.

It is hard at this stage to anticipate which emerging filmmaker will be the next to receive the Venice stamp of approval, but the young directing talents that we have seen this year at the Lido may indicate that perhaps something is moving.